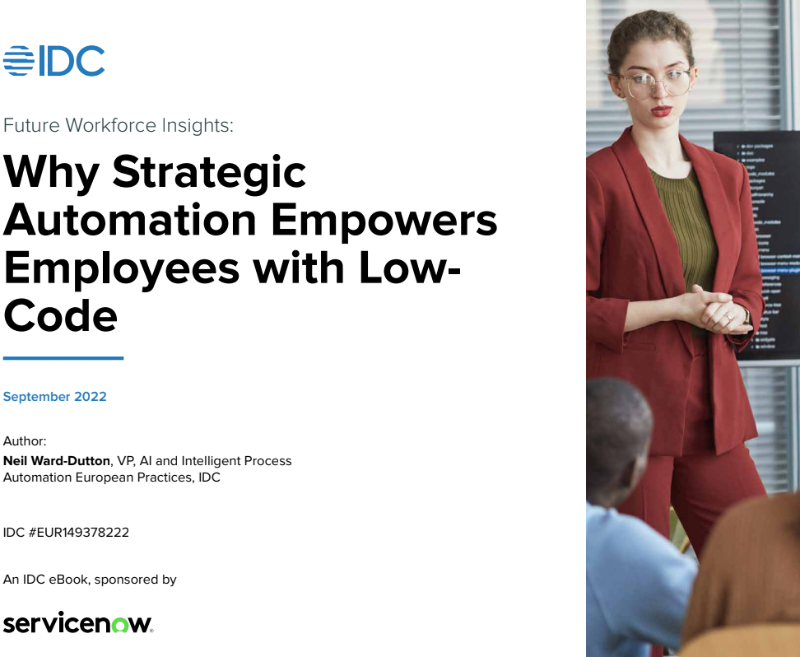 Automation's most typical advantages are process efficiency and cost savings, but its influence on empowering people has yet to be examined and recorded.

Can automation help a business recruit, retain, and empower employees as the competition for talent heats up? Can automation assist your employees in concentrating on the most important job for your company? Strategic automation may be the solution.

The convergence of the Great Resignation and the Race for Talent has made this a crucial moment to get automation properly.

Individuals are redefining their personal and professional objectives, emphasizing well-being and a desire for more meaningful, interesting, and satisfying employment. The demand for empowered employees to provide as much value to the organization as possible has never been greater. Automation technologies play a vital role in rethinking work and assisting individuals with career development for company success by replacing a substantial percentage of routine and repetitive jobs and making processes smarter (not simply quicker).

Not all automation projects have the same effect and empower staff. Most businesses are still in the early phases of their automation journey, with tactical solutions implemented for particular use cases (e.g., invoice processing) aimed at specific objectives such as process improvements or cost reductions. Tactical automation discovers and installs platform-specific technologies in a compartmentalized fashion when unique automation possibilities occur. As a result, personnel must often move between tools to finish a job.

In contrast, one-third of surveyed organizations have progressed in their automation journey and are fully using automation. Companies are improving operations at scale and combining automation initiatives in a coordinated enterprise-wide plan (for example, utilizing a chatbot to trigger patch updates on a customer's IoT device and marking this action on the customer's record for future inquiries). Employees are empowered by strategic automation, which increases corporate agility and long-term value.

Strategic automation provides opportunities for empowerment, innovation, and other benefits.

Employees may be liberated from dull and repetitive work by automation, increasing productivity. However, for automation to be genuinely meaningful and produce the maximum value for individuals and businesses, companies must evolve to strategic automation to break down silos, empower employees to level up their abilities, and eliminate obstacles to democratized creativity. A virtuous loop is generated, requiring higher production, empowerment, and creativity.

Recommendations for leaders in low-code and automated delivery

Insights on the Future Workforce: Automation and Low-Code

A systematic approach to automation that leverages low-code solutions may benefit digital delivery teams in two ways. For starters, it allows enterprises to extend the pool of individuals who may participate in solution creation and delivery, assisting IT teams in addressing recurring business concerns while decreasing demand for precious IT personnel. Second, it simplifies work for developers by reducing the heavy lifting that is sometimes involved with utilizing numerous distinct tools concurrently.

According to IDC, many workers (40%+) are anxious about their future career prospects. On the other hand, employee involvement in automation considerably reduces anxieties and concerns.

Most firms employ automation for various operations, with IT, customer service, and human resources being the most common. Employees said that 34% of their firms had begun a strategic automation journey, 54% utilized tactical automation, and 12% used no automation. Furthermore, 48% of the automation specialists reported that low-code products are currently in use in their firm.

The questioned firms suffered from various service delivery challenges, with customer discontent, repetitive duties, and delayed resolution times being the most serious. IDC discovered a strong link between the extent of service delivery failures and a lack of automation. In interviews with automation specialists, IDC discovered that the percentage of firms experiencing a gap between IT and business teams is substantially greater when there is no automation (35% vs. 17%).